Las Vegas’ No. 1 Firefighter has finally retired after 25 years of service. 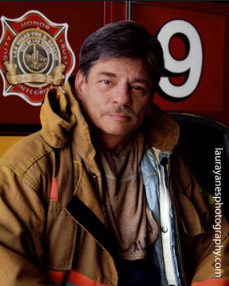 To quickly explain, “Number One” refers to the Las Vegas Fire & Rescue training number, similar to a badge number, assigned to Firefighter Allan Albaitis when the digital system was implemented nearly 25 years ago. And now after as many years of service, he has also moved into the coveted “Number One” firefighter seniority slot. He says it really doesn’t mean anything but his Nevada Professional Firefighter license plate (which, incidentally, he designed) reads simply, “ONE”.

On July 28, 1947, Allan was born near a town called Baldwin in the lower peninsula of Michigan. He graduated from North Muskegon High School in 1965. Honorably discharged from the military in 1969, and having an “Expert-Rifle” rating, his percussion training with his high school band and only a single semester of formal art education as a skill set, Allan decided that his musical skills might serve him better than his art or M-16. Being a rock star in the era of Woodstock had an undeniable appeal to a long-haired 25-year-old. Sending his drums ahead by bus, he straddled his motorcycle and left Muskegon Michigan for the desert of Las Vegas. Certainly, the “Entertainment Capital of the World” could find room for another good drummer. As it turned out, it couldn’t. “The good, steady musician jobs required juice,” he states. “I was definitely sans jus”.

A short-lived attempt at teaching at his own drum studio led to another few years of travel with bar bands and the eventual conclusion that a change was needed. A self-confessed adrenaline junky, Allan knew that wherever the change would take him, it had to be close to the edge. During this period, a TV show that caught his interest was the Jack Webb creation, “Emergency” which featured the exploits of Johnny Gage and Roy DeSoto of Los Angeles County Fire Dept. These were the formative years of the Paramedic program and for Allan, a foreshadowing of his future.

His first emergency response was in 1977 and began nearly five years as a medic with Mercy Ambulance, a private company, now American Medical Response (AMR). His first day as a professional firefighter with the Las Vegas Fire Dept. was January 18, 1982. He had finally arrived … at the edge.

The cliché anthem of the pedal-to-the-metal Baby Boomers, “Born To Be Wild”, for Allan wasn’t so much a theme song as a statement of obvious truth. “For 15 years, my only transportation was my Harley”, he states matter-of-factly. His fellow rescuers saw him not so much as a firefighter who also rode a Harley but as a biker who was also a firefighter. He still rides the Harley he has had for over forty years.

His art, however, was never far from his side. In the late ’70s and early ’80s, he cranked out a monthly cartoon strip called “Frank & Ziggy” for a 4-state motorcycle magazine, Freedom Rider. Once on the job, there were always situations that demanded an Albaitis cartoon. There is no shortage of material for “gotcha” cartoons in any firehouse. Over the years the “toons” evolved into serious art and in 1995, his first national release, “Return To Glory” was unveiled.

In 1997, Firefighter Albaitis published “Guardians” which features the spirits of long-gone old-timers in a thundercloud assisting their counterparts below to douse a house fire. The edition of 2500 prints sold out through his website, fireart.com, in 2002.

Many of his paintings have hidden or ambiguous images. At the request of the late Harvey Eisner – then editor of Firehouse Magazine, to create the cover of their Millennium Issue in the fall of 1999, Albaitis followed the directive to “imagine” American Fire & Rescue in the year 2025. While rocket-powered fire engines dominate the foreground, an orange/red nebulae in the distant background swirls with the image of a horse-drawn stream pumper in the epic, “Millennium Challenge”. His “American Grace”, a tribute to the responders of September 11th, 2001 seems to center on the image of an American Flag when, actually what appears to be a flag is the twisted, glowing wreckage of the smoldering towers. A pike pole of a firefighter in the foreground and the lighted windows of a skyscraper in the distance aligning with the starfield area, complete the illusion; there is no flag in the piece.

“If there is an underlying theme or philosophy to my work it is simply, ‘look again’. As with all things in life, there’s more than what meets the eye,” he says. “Look deeper and more shall be revealed.”

He recently signed his latest agreement with the world-renowned Bradford Exchange, for a seventh project which is providing much of the exposure necessary for his niche artwork.

“The day I hung up my gear for the last time was one of mixed emotions to be sure”, Albaitis says of that day, July 4, 2007. “But through my art, I will always stay in touch with those courageous men and women. Fire & Rescue has defined more than half of my life. Retirement will be a new chapter, but it’s the same great book.”

EPILOG: Talk about full circle … In addition to operating FireArt, Allan has gotten together with four other “senior” musicians and is playing in a classic rock band called The Arrhythmias. “Sitting at the drum kit again and playing with such accomplished musicians is better than any therapy”, Allan says. Although he does sing in some of the tunes, the ones chosen for the demo weren’t among them. Bass player, Dennis played with a group called Gallery in the ’60s/’70s who had the #1 Hit, “Nice To Be With You”. He also toured with Bonnie Raitt and Jackson Browne. You can see both, the longer and shorter versions of their demo at these links, respectively: