After having received links to many of last year’s massive wild fire photos I ran into a quote by a motor mouth who had his back up about how great we all have it. In response, there were tons of irate comments from firefighters and from our friends and relatives. This is what the fury was about and I could damned well see why those feelings were being expressed:

259. FIRE FIGHTERS ARE WAY OVERRATED! I’m so sick of hearing them called “altruistic” and “angels.” It’s a JOB to them. They don’t wake up every day with big, benevolent smiles, aching to protect your house and your car. They love what they do because it’s FUN. They are boys who get paid very well to spend almost all their time to working out, playing cards, and cooking chili. They love to play with all the expensive toys that the government (we taxpayers) give them. Half of them would be arsonists if they didn’t have an acceptable way to play with fire. They are not heroes. But they sure don’t shy away from all the glory or girls bestowed upon them by you sentimental dummies. Hardly any of them die or get hurt. 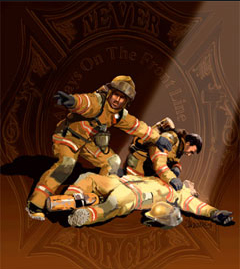 When I first read it, I was livid. Beyond pissed, I wanted to choke this oxygen stealing microbe until his tongue unfurled like Bart Simpson’s, and his eyes boiled out like Marty Feldman’s. It took a while but I calmed myself. (So calm, I would have settled for the Rodney Dangerfield degree of eyeball extrusion )

The fact was that I had been so furious with that comment that I had to examine myself and discover why I would have such an enraged (albeit internalized and relatively brief) response.

Personally I, like all of the firefighters I have worked with, met, or known through my FireArt contacts, appreciate those few and far between notes, calls or visits of appreciation from someone whose situation was made better because of what we do.

But we all also know that praise and adoration couldn’t be any further from the reason we have made the choice to do what we do. (it’s common knowledge that it’s really for the occasional drop off of pies and cookies )

Yeah, when it all goes right, and we use our skills, training, guile, and teamwork to come out on top, it’s a great feeling. Regardless of the type of call, when our mission is successful, when we see tears dry, when a family stops by the station with the grandfather that, without our intervention, they would not have had, we are being told that we are on track. We are doing the right thing, and who doesn’t want to hear that. It’s an affirmation that the horrific side of our job, images that will be with us until our dying day, the countless sleepless nights, and, literally the blood sweat and tears are worth it!

It’s been said that while many know what it takes to be a firefighter, very few know what it costs. We know. The truth is that, with very few exceptions, only we CAN know. Only those of us who have worn the badge, can really know the agonizingly helpless crush of losing a brother “soldier” in our unending war. Only we can feel the deep cut of failure when our best isn’t enough and we watch the light from a child’s pleading eyes flicker out. These are things that only we know, and that’s okay. Because when the light doesn’t go out but brightens and, sometimes right in front of our eyes, strengthens, focuses and becomes a beacon… we know with an unquestionable certainty that what we do is a good thing.

This is the “preaching to the choir” cliche if ever there was one. We’ve all had those long stretches when you start wondering if you even want to keep doing it. You know, the codes that become… that become nothing and you second-guess if you should have even started CPR. Or the out of town family is advised that their home has been saved by firefighters. “Our Heroes”, they say and four hours later you respond to a rekindle and complete devastation of their home and possessions. Yeah, when it all goes right, we might bask in the glow for a moment but it’s not about, “Ain’t we cool”. It’s about finding our way again. To me it seemed that the compass needed recalibration. Just about when I wasn’t sure if I could trust it… BAM! Along would come Bright Eyes or Grand Father and the old compass was readin’ true again and I knew it would keep me on course for a time to come. It’s a feeling that… well, you know. We know. We all know.

Just when you were wondering why you were even bothering anymore.

It’s almost like hearing a voice saying, “Now, do you see”?

Moreover, I know why Dave B.’s comment infuriated me to that degree. It was because he was wrong. Not just wrong but so, so far off the mark that I wanted to shake the hell out of him and scream, “You have no idea! You rude, contemptible son-of-a-bitch! You have no idea, goddamn it!! You couldn’t rise to lick the boots of half of the caring, dedicated people I’ve worked with! Don’t you get it?”

But Dave B. doesn’t get it. Dave B. will never know and that is what it is all about at the very most fundamental level.

When it really hit me, I kind of felt sorry for him. Unless, he somehow is allowed a true look into what our profession entails, he will always be the guy embarrassing himself by talking loudly about something he doesn’t even come close to understanding.

I could be wrong but I get the feeling that Dave B. wouldn’t be there for anyone but Dave B. Yet, to a man/woman every firefighter I’ve ever known would unquestioningly be there for him. Sleep well tonight Dave. We’ve got your back.

Maybe someday he will understand the way we understand. Maybe he will “get” what it takes to wade against a tide of people running to escape Hell. Not to be heroes but to be there for someone in need. But of course that will be the day that he makes a lifetime commitment to work with and for his fellow man to make this world a better place. That will be the day that he pins on his own badge but somehow I don’t think he’s got what it takes.

It takes caring. We all care for something, of course but I’m talking about a caring of the rarest kind. There is no explaining it in terms that can be understood by someone who doesn’t possess it so it may be an exercise in futility. But, the quality that is essential is that we see others as part of ourselves and in those critical moments at a subconscious, primal level we are rescuing our own family members – the larger “family” of man. I don’t think a sane person could risk his/her life for someone he or she doesn’t know unless that quality, that rare caring is within them. Do not construe this as a platitude elevating those who would do such a thing to some angelic status. That’s not at all what I am saying. We are all different and just as there are many things I wouldn’t do (being a police officer comes to mind) the majority of people would not want our job, and that’s a good thing. It’s all good.

So, now that I’ve calmed down a bit, sorry for ranting Dave. Maybe at the end of this day we can all be less judgmental as we deal with our differences. If each understands the other a little better we can get beyond what amounts to name-calling and the predictable backlash of resentment.

At the end of the day, “overrated” is subjective and amounts only to one’s opinion. Dave’s opinion is that we are overrated, and I have to allow him that.

My opinion is that we aren’t.